The Green Party of England and Wales is a growing political movement promoting social and environmental justice through campaigns, direct action and the electoral process. We established a local Gateshead Green Party in October 2009. We are a group of local people deeply concerned by the lack of sound judgment that mainstream parties seem to have for the people and the planet. Please join the Green Party today to help us grow and fight for our values. 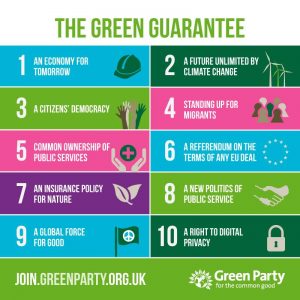 The Green Party’s philosophical basis is stated in our constitution:

Life on Earth is under immense pressure. It is human activity, more than anything else, which is threatening the wellbeing of the environment on which we depend. Conventional politics has failed us because its values are fundamentally flawed.

The Green Party isn’t just another political party. Green politics is a new and radical kind of politics guided by these core principles;

The Green Party of England and Wales is one of the oldest Green political parties in the world and has been campaigning for social and environmental justice for more than 30 years. We were founded in 1973 as ‘People’, became the ‘Ecology Party’ shortly afterwards and finally changed our name to the Green Party in 1985.

Scroll back to top